Better Formulation
Cetyl Extreme® Joint Supplement for Horses is proud to use a 100% Vegetable based (Kombo Nut) Cetyl Myristoleate along with high quality and high levels of proven ingredients such as Glucosamine, MSM, Vitamin C, Hyaluronic Acid (HA) and Bioflavonoids. Its combination of premium ingredients is unmatched and will help ease joint discomfort and/or maintain healthy joints in your horse.

Better Delivery System
Why did we make Cetyl Extreme® for Horses in a granular form versus pellets? Simple, pellets require a significant amount of heat to be manufactured whereas granules don’t. Heat is detrimental to supplements as it breaks down the nutrients and therefore rendering them less effective. Our alfalfa base along with apple and dried molasses flavoring will also insure that your horse will love it!

Testimonials
I had to retire my 17yr old quarter horse from barrel racing due to its arthritis (mainly in its hocks). No supplement worked well enough for me to take her out of retirement. I don’t if it’s that cetyl myristoleate or the combination of that and the HA but I can ride her again and she is more than willing now. That was only after 4 weeks of being on the product too! That stuff really worked for my horse.
Jen – Abilene, TX

WOW! Within 2 weeks, my 14yr wasn’t clicking anymore and was moving much more freely! Love this product!
Monica – Temecula, CA

Announcing Trade Supplier of the Year Winner at the 2015 BETA International show in Birmingham, UK This past week, Greg Giles, CEO of Cavallo Horse & Rider, attended the BETA (British Equestrian Trade Association) show in Birmingham, England. We just received an exciting report from an overjoyed Greg, letting us know that Battles (one of our top wholesale suppliers of Cavallo Hoof Boots) just won the BETA "Trade Supplier of the Year" award for 2015! To top it off, this is their second year in a row claiming this prestigious award. In his acceptance speech, Battles Managing Director, Jim Bowen, said, "This award is voted by the retailers and is acknowledgment of the ongoing service and excellence that Battles has provided...and is also reward to our exclusive vendors, like Cavallo, that they are being well represented in the U.K. market." According to Claire Williams, Beta Executive Director, “The BETA Business Awards have become a prestigious landmark within the equestrian industry’s calendar. They have continued to develop in popularity year upon year, with increased nominations and a growing spirit of competition. The awards are a tremendous way for the trade to recognize and celebrate the achievements of its members.” Cavallo Horse & Rider began their business relationship with Battles in 2009. Carole Herder, Cavallo President, says they have never looked back: "It's been a privilege to work with such a highly esteemed company as Battles. I feel our combined efforts truly continue to change the world, one horse at a time!" A company known widely for their forward thinking and personal approach to business, Battles has enjoyed 182 stimulating years in operation, evolving and progressing dynamically through their commitment to thriving in an ever-changing market. They have continually embraced technology and innovation without losing sight of tradition and the expectations of their increasing customer base. This award is encouragement to us, at Cavallo, who are so warmed to see a company like Battles working hard to further our efforts to increase the comfort and well-being of horses in The United Kingdom.

Battles Wins Back to Back! Here's what YOU'RE saying! Happy horses all around...just the way we like it!

A Review to Reckon With - Horse Trail Chicks Tell it Like it is!

Greg was approached by the 'Horse Trail Chicks' at a show last year. They requested a pair of Trek so they could do a review - and they were very clear that they provided only unbiased and impartial views.  We're excited to see that, after giving their Treks a serious workout over last Winter and Spring, their review is READY!!!  Here's a snippet: "This past winter I had the opportunity to try a pair of Cavallo Trek Hoof Boots.  Prior to this, I had pretty much written off hoof boots, having had a few experiences with boots flying off at the trot or gallop and causing bucking episodes and other unpleasantness. So when I saw the Cavallos at Equine Affaire, I was pretty excited – they looked like they would stay put on the hoof. They can also be fitted with studs, which means that my horse – who is always barefoot in the winter – can safely walk out on icy roads..." To read the full review, please click HERE! 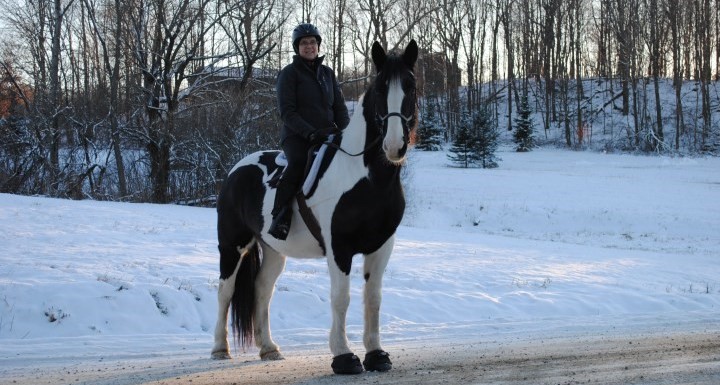 An EXCITING Night for a Mini with Laminitis!

Valentine was hurting...bad!  Then her owner rustled up some CLB's and the MAGIC happened: "This has been an extremely exciting night for us!!!  It's the first time Valentine has been able to go out on gravel since she foundered almost 2 years ago! So happy these came in the mail today. They fit perfectly and she may or may not be wearing her mother’s socks! 😉 She hasn’t wanted to go anywhere besides her paddock and stall - but tonight she went all over the property!"

These Boots are the BOMB! These boots are the BOMB!!!!  My 30 year old retired show horse was having trouble keeping shoes on, so my farrier and I decided to take them off and let him go barefoot.  Unfortunately he quickly became very sore and could barely walk out to the pasture.  My farrier suggested I try Cavallo Boots, as he had a client who used them with great success.  I immediately ordered a pair and they arrived two days later.  The boots were incredibly easy to slip on and fasten....but the real test.... 1. Will they stay on? 2. Will they rub? The answer to 1. is YES!!! The answer to 2. is NO!!!  My old boy walked out without any soreness and, once in the pasture, he proceeded to trot, then gallop around like he was a ten again!  This, after barely being able to walk!   He's worn his Cavallo's 24/7 for the last two months and he has yet to lose them or get a rub (even with a few crazy runs with his pasture mates!).  I can't say enough about these durable, well-constructed boots and would highly recommend them to anyone.  My farrier did quietly say the boots could put him out of business if everyone caught on to these...  Once again they are the BOMB!!! -Martha Wentworth, USA

Back Country Horsemen of BC - Kicking Butt in Cavallos!

“Thought you might be interested in this post. The paint mare I rode wore Cavallo Hoof Boots for three days of riding - a 60 km pack trip along the Collins Overland Telegraph Trail (west of Quesnel). I'm honored to be part of the first packers to travel this entire cleared section in 50 years - paying tribute to Dwight Dodge, enjoying fascinating history, and appreciating all the hard work of Rob and BCHBC North Cariboo chapter." -Tania Millen (photo taken by Rob LaFrance) To read more about the Back Country Horsemen of BC's quest to revitalize the historic Telegraph Trail, click HERE!

Nothing Comes Between this Mule and her Cavallos! "I love Cavallo boots!  I've been using the Trek Slim boots on my mule for about eight years and they work great!  Worth every penny.  I still have the first pair I bought - I use them on the backs and bought new pairs for the front. These Boots really last a long time, I just can't say enough good things about them. They've never come, off no matter what I ride through, and I ride through some pretty thick mud and very rough terrain! Okay - I took some pictures of Pearl wearing her Cavallos.  She's a 16-3 hand Percheron Tennessee Walker Mammoth Jack stock mule. I love my Cavallo Boots I've had one pair for 8 years and another pair for about six and they're still in great shape. I highly recommend these boots to people with mules as I've tried all types of boots before these and none worked efficiently - they all came off. The only boot that has stayed my mule is the Cavallo Trek Slim." -Meredith Andrews

The Happiest Haflinger - Competing in Cavallos

"Me and my Haflinger pony Wilma have been really happy with our Cavallo boots! Wilma was barefoot when I bought her and I wanted to give her a chance to stay that way, despite that I was planning to turn her into a competing sport pony. With Cavallo boots, Wilma's hoofs are doing great even though we train 5-6 days a week on varying surfaces. We have also started our competing career with Cavallos! Cavallo boots have been easy to fit, easy to put on and easy to keep clean. They stay on tight and are comfortable for the horse! In Finland hoof boots are quite a new thing and people don't know that it's possible to compete in show jumping with boots. After buying Cavallo boots for Wilma, I got numerous questions on our Instagram account about going barefoot, using boots and training and competing with them. Barefoot Wilma can be found on Instagram at @dancingonfourlegs !" Picture: © Emma Pajuvesa Best wishes, Essi Sohlman So keep the letters and emails coming, we just can't get enough! Wishing you and your horses many happy trails,